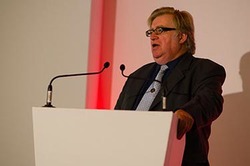 ​Professor Thomas Acton OBE ran the first Gypsy Council Caravan Summer School in 1967, was a student helper at the first World Romani Congress in 1971, completed a PhD on British Gypsy Politics in 1974 and has been working with Roma, Gypsy and Traveller organisations and writing books and papers ever since. He is Emeritus Professor of Romani Studies at the University of Greenwich, a visiting professor at Corvinus University Budapest and Senior Research Fellow at Buckinghamshire New University.

​Roza Kotowicz was brought up in a traditional Lovari Roma family in Poland. Through her work with the Roma Support Group, she has impacted on the whole of the field of Gypsy/Roma/Traveller community work in the UK. By combining an important high-profile unpaid voluntary role with her family responsibilities and by promoting the interests of Roma groups across the spectrum rather than just her own community, Roza acts as a powerful role model to all Roma women in general.

Peter started out as a Residential Social Worker in a multi-role children’s home in Islington LA.  He later qualified as a Primary School Teacher in 1988 (B.Ed. Hons.), and has taught in Waltham Forest and Newham Local Authorities.
In 1999 he became the Gypsy, Roma and Traveller Education Consultant in the London Borough of Waltham Forest, where there are now some 600 identified Gypsy, Roma and Traveller children and young people.  He has travelled extensively across Europe on a wide range of Gypsy Roma and Traveller assignments, and has also co-authored several GRT resources for schools.

Anthea Wormington was Gypsy, Roma, Traveller Education Services’ Co-ordinator for L.B. Newham until 2011. She was President of NATT+ (National Association of Teachers of Travellers and other Professionals) from 2007 to 2009 when she was proactive in both raising the profile of Roma students and implementing Gypsy, Roma, Traveller History Month nationally.

Robert is a visual artist who migrated from Hungary to London in 2010. He draws inspiration from his Roma identity and his art contributes to the debate on Roma culture, history and contemporary situation of Roma people. His paintings were exhibited at various art outlets in London, including Waterstones Gallery, London’s Park Theatre, UCL’s Festival of the Arts and Festival of Culture, Red Hand Gallery, as well as the Goethe Institute and Collaborative Arts Festival in Budapest, and New York University​

Sharon Elliott has over a decade of operational management experience in the charity sector with a legal background in the education and criminal justice system. She manages diverse teams of professionals (e.g. legal advisors, youth workers, community workers) to ensure the best outcomes for service users in line with quality standards, health and safety regulation, organisational policies and procedures. She also has professional experience of dealing with all staffing concerns including appraisals, grievance and disciplinary procedures. She has lived and worked in Newham for many years and understands the cultural richness and diversity of the communities in the borough as well as some of the acute challenges that they face. Furthermore, as a daughter of migrants, who lived in Newham for over 10 years, she has lived through the experience of integrating with the community and is keen to support other migrant communities.​​​

Dada has been working with Roma refugees and migrants for 14 years and supported statutory and non-statutory organisations working with Roma communities through training, capacity building and consultancy support. She conducted and contributed to researches, articles and publications related to Roma issues in the UK. She now works at the Law for Life: Foundation for Public Legal Education as Head of Education and Training.

Michaela Jarosinska graduated from Jagiellonian University of Cracow with a master’s degree in Psychology. She is a member of Polish Psychologists’ Association and International Academy of Investigative Psychology (IA-IP). Michaela joined FPWP Hibiscus charity as a project worker in July 2008. She provides support, advice and advocacy to Foreign National and BMER women in female prisons.

Cornel Rezmives has been an active promoter of democracy and human rights in Romania, prior to the revolution in 1989 and following the fall of Chausescu’s regime. As a member of the Roma ethnic minority in Romania, he has worked towards promoting Roma human rights as a political activist, elected councillor and by supporting other Roma leaders through training and empowerment. He has been involved in supporting Roma in France, Portugal, Germany and Spain. Currently he endeavours to support and empower the Roma community in the UK both in a capacity as a volunteer support worker and a trustee of the Roma Support Group.

​Mircea Rostas’s dedication to creating opportunities for younger generations of Roma in the UK, makes him a fervent advocate for enhancing educational outcomes of young Roma. His other areas of interests include disabled people’s rights and health inequalities experienced by Roma community members in Romania and the UK.

Michael has worked in immigration and social welfare law for over 20 years - at Refugee Legal Centre/ Refugee and Migrant Justice for 14 years, then as Director of Lambeth Law Centre since 2010. He is now the Legal Officer at Jesuit Refugee Service.

He is one of the key 'actors' behind a successful Judicial Review in December 2017, which made the Home Office policy and practice of detaining and deporting rough sleeping EU migrants unlawful.

He has been involved in trying to link up Roma people - and other marginalised groups with access to legal advice and to make sure their voices are heard and listened to in the advice sector.

Leon Wisniewski’s area of expertise involves conflict resolution and Roma history, including recent Roma migrations from Eastern Europe. Being an enthusiastic facilitator of intergenerational dialogue, he also advocates for Roma Older People, highlighting their perspective, concerns and aspirations. Leon Wisniewski has been actively campaigning for Roma rights in Poland and the UK since 1990s.
Powered by